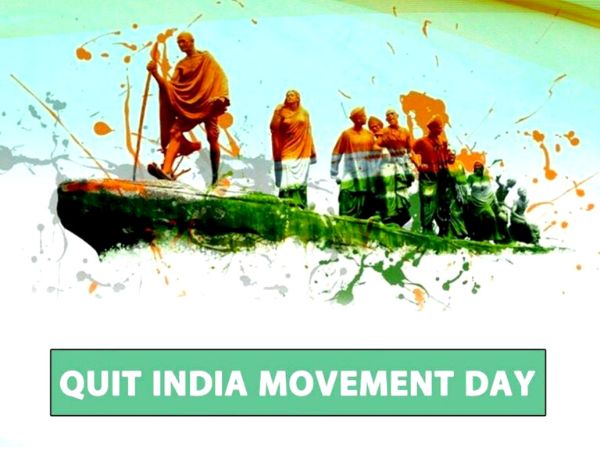 In the history of India, August 9 is remembered as the day of August Kranti or August Kranti Diwas. In 1942 Mahatma Gandhi Initiated the full and final revolt against the British Empire on the name of Quit India Movement. The Quit India Movement, also known as the August Movement, was launched at the Bombay session of the All India Congress Committee by Mohandas Gandhi on 8th August 1942. It was during World War II, when Indians initiated a movement under the leadership of Mahatma Gandhi demanding an end to British rule in India.

In late March, 1942 the Cripps Mission led by Stafford Crips, which was aimed to secure Indian favour in British war efforts in World war 2, met with failure. It was after the failure of Cripps Mission that Gandhi ji made a call of Do or Die in his Quit India Speech on August 8, 1942 at the Gowalia Tank Maidan. Today this place is known as Kranti Maidan. The All India Congress Committee launched a mass protest demanding what Gandhi called “An Orderly British Withdrawal” from India.

Going back to the beginning of Quit India Movement, then it was 14 July 1942, when the Indian National Congress at Wardha session adopted a resolution demanding complete independence from the British government. It is stated in the resolution that if the Britishers did not leave India now, a civil disobedience movement would be launched against them on a nationwide scale.

Initially Pandit Jawaharlal Nehru and Maulana Abul Kalam Azad along with other workers of INC were skeptical about the proposed movement, but soon decided to support it in the end on the call of Bapu. Apart from this, senior Gandhian and socialist Sardar Vallabhbhai Patel, Dr. Rajendra Prasad, Ashok Mehta and Jayaprakash Narayan openly supported this movement. However, the Muslim League, the Communist Party of India and the Hindu Mahasabha opposed the movement.

As soon as the movement started, all the members of the Congress Working Committee started to get arrested from August 9. While Mahatma Gandhi was taken to Ahmednagar Fort under house arrest. In this movement of non-violence, about 940 people died due to the ruthlessness of the British. While 1630 people were injured. At the same time, more than 60 thousand activists were arrested. But this movement united the whole country.

On the occasion of 80th anniversary of Quit India Movement; the biggest non violence revolt ever against British Empire, Prime Minister Narendra Modi paid his tribute to Mahatma Gandhi and tweeted, “Remembering all those who took part in the Quit India Movement under Bapu’s leadership and strengthened our freedom struggle”

Remembering all those who took part in the Quit India Movement under Bapu’s leadership and strengthened our freedom struggle. pic.twitter.com/cWWB7KX57G

9th August 1942
Let us remember the historic day when the Quit India Movement was launched by Mahatma Gandhi to put an immediate end to British rule in India.

Here’s a picture of him at the start of the Movement in Bombay.

#OnThisDay in 1942, #MahatmaGandhi gave the clarion call of ‘Do or Die’ from Gowalia Tank Maidan to end the British rule & launched the Quit India Movement.
Homage to all Freedom Fighters and the supreme sacrifices of the Martyrs during our Freedom Struggle 🙏#IDayOnAIR pic.twitter.com/PgbIlTWKe6