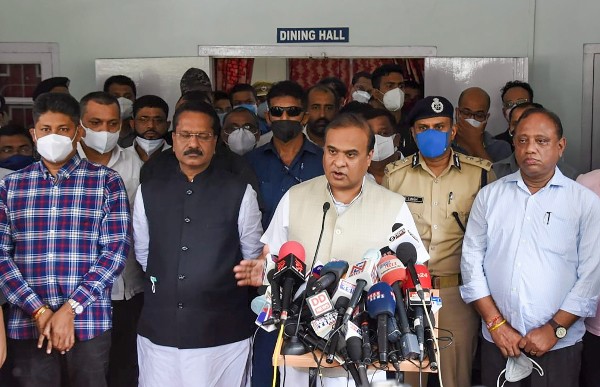 Mizoram claims that a 509-square-mile border of the inner-line reserve forest was notified in 1875. This is the actual boundary separating Mizoram and Assam.
The dispute originated in 1875 when the differentiation of Lushai Hills from the plains of Cachar. Lushai hill was the former name of Mizoram before it became a state.
Another notification was in 1933, when British forces drew a border between Assam and the Lushai hills.
Troubled by the constant raids, the British introduced the Inner Line Regulation (ILR) in 1875 to separate “their” territory of Assam from the hilly, tribal regions. Then Mizos welcomed it. In 1993, the British created a more formal border between Cachar and the Mizo hills. The Mizos agitated against it.

To resolve this, the Mizoram government has constituted a boundary commission and officially intimated the matter to the Centre. It is at present studying and assessing old maps and documents to assert its claim further.
Assam claims that the boundary in the 1933-survey of India’s map is the constitutional boundary.
Several dialogues have been held since 1995 to resolve the border dispute, but unfortunately, none yielded the result.

The Assam-Mizoram border dispute started a century and a half back. The British demarcated a boundary between the Lushai Hills (presently in Mizoram) and the Cachar plains (presently in Assam) in August 1875.
However, the people of Mizoram accepted this border as it was drawn with the consultation of the state chiefs.
Later, in 1933, a notification distinguished the princely state of Manipur and defined all the boundaries of northeast India. Conflicts ignited when Mizoram officials denied accepting the notification of 1933. They opposed this notification because, according to them, this distinction did not include any consultation with Mizoram officials.

Government’s Take On This Dispute

The Central Government carved out Mizoram from Assam as a Union territory in 1972. Later it was made a state in 1987. Assam’s districts, Hailakandi, Cachar, and Karimganj, share a boundary of 164 km with Mizoram’s Mamit, Aizawl, and Kolasib districts.
Later, Assam & Mizoram kept accusing each other of taking over the land from 1987 onwards.
The first clash occurred seven years after Mizoram’s formation in 1994. Many discussions were organised by the Central Government between these two states over their dispute, and the conflict continued.

However, the Assam-Mizoram border conflict commenced a century ago, and several incidents stirred up hatred. It all started from a disagreement over an imaginary line between these two states but continued through several conflicts and casualties.

The main challenges that have been stirring this dispute are as follows:

1. Assam claims that Mizoram has trespassed their claimed boundary. On the other hand, Mizoram blames Assam for the unilateral movement inside their territory.
2. State Governments of both states have appointed officials under various sections of the Indian Penal Code(IPC) to resolve this conflict.
3. For All of the above, the Assam Government suggested their citizens not travel to Mizoram. Also, it asked its citizens residing in Mizoram to maintain utmost caution.
4. On the other side, Mizoram blames Assam as the culprit for obstructing NH-306 and removing railway tracks. NH-306 are considered a lifeline of Mizoram, and jamming it results in an economic blockade which eventually leads to irreversible losses.

The border clash turned violent in July 2021, when Assam and Mizoram police forces engaged in a gunfight. As a result, seven people died, including six police officers from Assam, and 60 others got severely injured. The states later held a ministerial-level meeting, deciding to maintain peace along the border and resolve the dispute through dialogue.

Maintaining a state quo might not bring peace back. For a peaceful resolution of such inter-state border conflict, both Central and State governments should look at the other sides of the solutions as well:
1. Both the states, Assam & Mizoram must come forward to settle the dispute cordially by forming a committee. It must include government officials, civil societies, leaders and other eminent persons for an extensive understanding of the conflict.
2. The committee must consider the states’ local leaders and chiefs. Both states must consider recommendations made by this committee.
3. Civilians will play a major role in this resolution. So chiefs and leaders will make a huge impact on ground level. The Local Government must propagate the bright side of this resolution.
4. The Supreme Court must introduce strict deadlines to resolve conflicts between the two states.

A solution to such border dispute will enhance the livelihood, overall connectivity and employment opportunities in both states. It will help the Northeast become a doorway to South-East Asia.